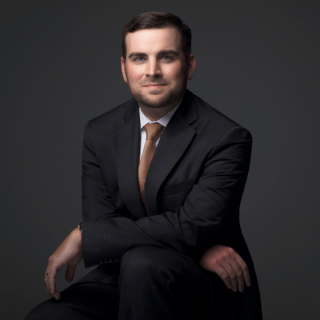 He joined the Bryant Law Center in 2014. His primary practice areas include workers’ compensation, personal injury, and criminal defense. Austin and his legal assistant, Shauna, head the Bryant Law Center’s workers’ compensation department, taking pride in their advocacy for hundreds of injured workers they have represented across western Kentucky.

Austin’s interest in law began in high school when he worked part-time for a local law firm. He then clerked with the Bryant Law Center while in law school. As a clerk at the Bryant Law Center, Austin worked on numerous criminal cases, workers’ compensation cases, and train derailment lawsuits across the country.

Austin is a member of the Kentucky Justice Association and McCracken County Bar Association. He is also a proud alum of Leadership Paducah Class #29. Austin and his wife, Lauren, a pharmacist at a local, family-owned pharmacy, live in the Midtown area along with their miniature dachshund, Scarlett. He is an avid golfer and die-hard fan of UK athletics and the St. Louis Cardinals.