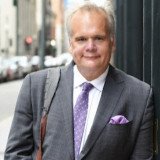 Free ConsultationTraffic Tickets, Personal Injury, Probate and Social Security Disability
Loyola University New Orleans College of Law
Show Preview
View Lawyer Profile Email Lawyer
Ms. Rosado is a licensed attorney and notary in the State of Louisiana. Ms. Rosado received her J.D., dual degree in civil and common law with a concentration in International Law, in 2009 from Loyola University School of Law where she was a member of the Loyola Trial Advocacy competition teams: – Michigan State in the Spring of 2008 – AAJ in the Fall of 2009 Ms. Rosado served as an officer on the Trial Advocacy Board from 2008-2009. While at Loyola, Ms. Rosado was involved in: – Loyola’s Law Clinic – Public Interest Law Journal –...

Marlin Gusman, Jr. is married to Varsha with whom he has two children: Priscilla and Marlin III.

Traffic Tickets, DUI & DWI, Maritime and Personal Injury
University of Louisiana - Lafayette and Loyola University New Orleans
Show Preview
View Website View Lawyer Profile Email Lawyer
"Having been involved in a catastrophic car wreck only a few years ago, I know exactly what's it like to be laid up in a hospital for days, not be able to work or do normal daily activities for months at a time, and stuck wondering how you'll pay for a new car or your medical bills. I know the aggravation and frustration that my clients have because they can't drive, have to go to treatment, or simply hate waking up in the morning because they're sore. It's because of this first-hand knowledge that I am able to relate to...

Traffic Tickets
Loyola University New Orleans
Show Preview
View Website View Lawyer Profile Email Lawyer
Heather C. Ford is a traffic ticket attorney based in the New Orleans area. A Louisiana native, Heather obtained her undergraduate degree in chemistry at Dillard University. She received her JD from Loyola University where she served as the initial coordinator of the Hurricane Katrina legal advice clinic. Through her practice at the Law Office of Heather C. Ford, Heather has striven to help the New Orleans community with their traffic ticket related problems.

Cynthia is a member of the Criminal Justice Act Panel in the Eastern District of Louisiana and serves on the board of the Louisiana Association of Criminal Defense Lawyers. She has presented at CLEs regarding the...

The Oyez Lawyer Directory contains lawyers who have claimed their profiles and are actively seeking clients. Find more Covington Traffic Tickets Lawyers in the Justia Legal Services and Lawyers Directory which includes profiles of more than one million lawyers licensed to practice in the United States, in addition to profiles of legal aid, pro bono and legal service organizations.