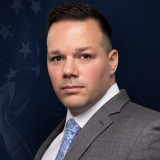 Claimed Lawyer Profile
Harold Moroz
Douglas County, GA Military Law Attorney with 26 years of experience
(904) 444-4598 P.O. Box 1426
Douglasville, GA 30133
Military, Administrative and Business
UDC David A. Clarke School of Law and St. John's University School of Law
Show Preview
View Website View Lawyer Profile Email Lawyer
Judge Hal Moroz is an attorney and counselor at law, having represented clients up to and including the United States Supreme Court, a former county judge and city chief judge, and a longtime veterans advocate. He is also an author and retired U.S. Army officer, having served in the airborne Infantry. Judge Moroz is an accomplished educator, having served as a professor of law, an author, and media commentator. Judge Moroz's books can be purchased at Amazon.com or any major online bookstore. Find out more at morozlaw.com or veteranslawcenter.org --- or --- read any...

Claimed Lawyer ProfileSocial Media
Holland King
Cherokee County, GA Military Law Lawyer with 7 years of experience
(404) 594-2755 8014 Cumming Hwy
Ste 403-129
Canton, GA 30115
Military and Tax
Georgia State University College of Law
Show Preview
View Website View Lawyer Profile Email Lawyer
Holland King has been in the tax controversy world for more than 13 years, advising and defending clients on state and federal tax issues. Holland holds a BS in Computer Science from the Georgia Institute of Technology, a Master of Taxation, and Juris Doctor from Georgia State University and is a licensed attorney in the State of Georgia. He has published articles on taxation and law in the Journal of Multistate Taxation and Georgia State Law Review. He is located in Cherokee County, GA.

Holland is admitted to practice in Georgia as a member of the Georgia Bar and is a...

Claimed Lawyer ProfileSocial Media
Brian Anthony Ramey
Muscogee County, GA Military Law Lawyer with 19 years of experience
(706) 536-9085 833 3rd Avenue
COLUMBUS, GA 31901
Military, Divorce, Family and Juvenile
Florida State University College of Law
Show Preview
View Website View Lawyer Profile Email Lawyer
Brian A. Ramey was born and raised in Kingsport, Sullivan County, Tennessee. He graduated from the University of North Carolina at Chapel Hill in the spring of 1996 with a Bachelor’s of Science degree in Chemistry. Later, he attended the Florida State University where in the fall of 1998 he obtained a Master’s of Science degree in Biochemistry. From 1999-2000 he was a doctoral student in Biochemistry at the University of Miami, Florida. During this time he discovered that his true passion and goal in life did not lie in the physical sciences, and he made the decision to attend...

Free ConsultationMilitary, Business, Criminal Defense and Family
University of Virginia School of Law
Show Preview
View Website View Lawyer Profile Email Lawyer
Tyler Lee Randolph has over 20 years of legal experience and over 20 years of military experience (Active and Guard), from real combat to combat in the courtroom. A graduate of West Point and of the University of Virginia School of Law, he has the education and experience to guide and assist you in your specific time and area of need, and the personal attention you deserve.

The Oyez Lawyer Directory contains lawyers who have claimed their profiles and are actively seeking clients. Find more Cobb County Military Lawyers in the Justia Legal Services and Lawyers Directory which includes profiles of more than one million lawyers licensed to practice in the United States, in addition to profiles of legal aid, pro bono and legal service organizations.