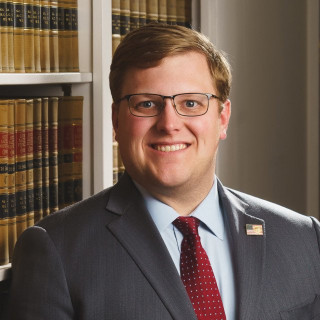 Wren M. Williams is the President of Schneider & Williams, P.C. He graduated from Patrick County High School and went on to attend Hampden-Sydney College as a Patrick Henry Scholar. There, Williams was active in student government, president of his fraternity, and received the Cohen Citizenship Award from the Lambda Circle of Omicron Delta Kappa. Williams graduated cum laude from Hampden-Sydney College, earning a BA in English with minors in both Rhetoric and Creative Writing. Following graduation, Williams attended Samford University’s Cumberland School of Law for its outstanding trial advocacy program. During his time at Cumberland, Williams served as the Executive Editor of the American Journal for Trial Advocacy, in which he published several law review articles. In conjunction with obtaining his law degree, Williams completed his Masters in Business Administration at Samford University’s Brock School of Business. After graduating, Williams married his law school sweetheart, the former Miss Britt Schneider and returned home to Patrick County. Together, he and his wife established Schneider & Williams, P.C. in order to serve the communities of Patrick, Henry, and Floyd County. When he is not helping clients with their business ventures, guiding them through their legal endeavors, or appearing on their behalf in court, Williams can be found playing fetch with his chocolate lab, Mousse, or tinkering with a Do-It-Yourself project on his family's farm in Stuart, Virginia.

Moving Forward: The Benefits and Concerns of the Narrower Interpretation of Title VII
American Journal of Trial Advocacy
2014

Removable or Not? The Indecisive Sixth Circuit Creates Its Own Split Within the Circuit Court Split Regarding Removal of Actions from Administrative Agencies to Federal Courts – Smith v. Detroit Entm’t
American Journal of Trial Advocacy
2013