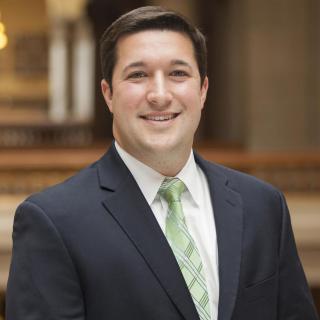 Ryan Hatfield is an attorney at Hatfield Law in Evansville, IN, and serves as a State Representative in the Indiana General Assembly. As an experienced trial lawyer, Ryan represents clients in a wide range of matters in state and federal courts. Prior to joining Hatfield Law, he served as a Deputy Prosecutor in Vanderburgh County prosecuting felony drug cases, sexual assaults, and homicides. He also served as an instructor at the Southwest Indiana Law Enforcement Academy and as prosecutor for the Vanderburgh County Treatment Courts and Veterans Court.

As State Representative, Ryan serves as a member of the following committees: Criminal Code and Courts; Judiciary; Elections and Apportionment (RMM); and, Utilities, Energy and Telecommunications.

Alongside his work at Hatfield Law and in the General Assembly, Ryan is an active participant in Indiana legal education, serving as an instructor for local and state bar courses and as an adjunct professor at Ivy Tech Community College.