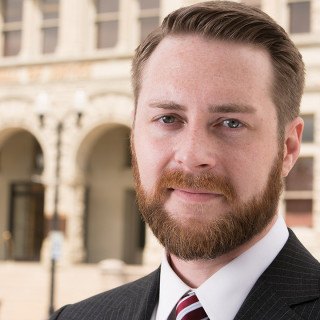 Robert "Rob" A. Morrin was raised and educated in Richmond, Kentucky. He completed his undergraduate studies at Eastern Kentucky University, earning his Bachelor of Arts degree in Political Science in 2004. Upon application to Salmon P. Chase College of Law, he was awarded an academic scholarship which allowed him to attend.

While at Chase, he served as a Member of the Honor Council, a Student Representative in the Student Bar Association, Congressional Intern on Capitol Hill in Washington, D.C., a Group Leader for the pro bono project Water for Haiti, and as a Criminal Defense Intern with the Kentucky Innocence Project. Upon graduating from Chase in 2011 he moved home to found Morrin Law Office in his home town of Richmond, KY, where he has practiced as a personal attorney for Central Kentucky.

Mr. Morrin is currently working in cooperation with #EndPartisanship.org to defend and promote the principle that every voter is entitled to an equal right of meaningful participation in the election process, whether or not they choose to affiliate with a political party.

When he is not protecting the legal interests of his clients, he enjoys spending time with his family, hiking, volunteering, keeping up with local sports and politics, patronizing local businesses, and at least one weekly session of pickup basketball.

Top 10 Personal Injury Attorney
Attorney and Practice Magazine
2019
Attorney and Practice Magazine Top 10 attorney award is an achievement reserved for only those attorneys who have demonstrated the highest degree of excellence in his or her area of law. Because of our stringent standards, less than 1% of attorneys nationwide will receive this invitation for membership, subscription and list inclusion which is published on www.attorneyandpractice as well our quarterly magazine.

10 Best Attorney Client Satisfaction
American Institute of Personal Injury Attorneys
2017
Our rating system helps clients throughout the United States make educated decisions when it comes to choosing their attorney. Membership is an exclusive honor and extended only to those selected few who have reached the top of their profession while doing so with the client’s satisfaction being of the most paramount importance.

If you've been hurt in a car accident then you should contact the Richmond Kentucky personal injury lawyer who works every day to help folks through car accidents, the insurance companies, medical bills, and recovering from serious injury. We do things differently and our clients love the difference! 859-358-0300

The Morrin Law Office is glad to offer a potentially life-saving app for free! If you get into a serious car accident and are rendered unconscious then you may not get the help you need in time to prevent permanent injury or even death. This app detects when you are in a car accident and automatically notifies your emergency contacts that there has been a collision. It also provides your location. Think of it as a FREE Onstar for your phone. If you get in a car accident then contact the Richmond Kentucky car accident lawyer who helps folks through car accidents every day. We do things differently and our clients love the difference! 859-358-0300