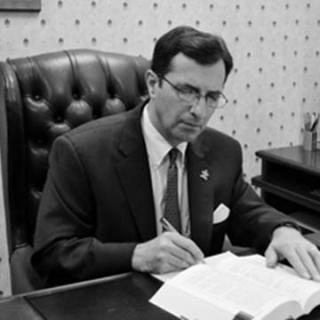 Mr. Reinheimer received his Bachelor of Arts Degree in Political Science in 1988 from Ursinus College. He attended Thomas M. Cooley Law School in Lansing, Michigan where he received his Juris Doctor in 1992. While attending law school, Mr. Reinheimer was a law clerk/legal intern for the Sixty Plus Elderlaw Clinic where he concentrated in Elderlaw issues along with Estate Planning and general litigation. Upon Mr. Reinheimer’s completion of law school, he served as judicial law clerk for the Honorable Michael D. Farren, P.J.Cv. in Monmouth County, New Jersey. After his judicial clerkship, Mr. Reinheimer was an associate with the law firm of Callan, Regensteich, Koster & Brady where he specialized in insurance defense litigation, auto negligence and premises liability claims. Presently, Mr. Reinheimer’s practice areas consist of Chapter 7 and Chapter 13 Bankruptcy, for both debtors and creditors, Personal Injury, general State Court litigation, collection, landlord-tenant, workers’ compensation and general insurance law. Mr. Reinheimer is licensed to practice law in the States of New Jersey and Pennsylvania along with the United States Federal District Court for the District of New Jersey. He is a member of the Ocean County Bar Association. Mr. Reinheimer was elected to the Outstanding College Students of America in 1987 and was admitted to Who’s Who Among American Law Students 10th edition in 1990. As a result of Mr. Reinheimer’s tireless work on behalf of the impoverished, he was presented with the Legal Services of New Jersey Equal Justice Medal for his pro bono services in May, 2006. Mr. Reinheimer is married and raises his two children in Ocean County, New Jersey.