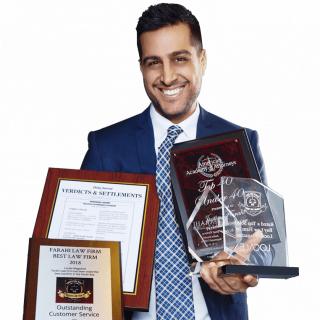 In 2007, he graduated with a Bachelor of Arts from the University of Southern California. He got his Juris Doctorate from Loyola Marymount University. In 2013, he also got his Masters in Business Administration. In 2014, he was admitted to the State Courts of California.


Before starting his own law firm, he worked for Rastegar Law Group, APC as a Litigation Manager. Before this, he worked as a Legal Intern at the law firm McNicholas & McNicholas, LLP.


Attorney Farahi helps Law Schools and Businesses with legal issues regarding Personal Injury Law and worker's compensation. He also helps them with running seminars. Attorney Farahi cares about his clients and keeps in touch with them even after the case is over.


Attorney Farahi led the Business Law Society from 2011 to 2014 and the Loyola Marymount Philanthropy Association from 2012 to 2014. He is also a part of the State Bar of California, the American Association for Justice, and the Consumer Attorneys Association of Los Angeles.


In 2022, Attorney Farahi was awarded the Best Law Firm by the American Institute of Trial Lawyers, Lawyer of the Year by the American Institute of Legal Professionals, Attorney of the Year by the National Alliance of Attorneys, and Top 100 by the National Trial Lawyers Association. He is also a member of the Consumer Attorneys of California Board of Directors.

Justin Farahi finds it rewarding to help accident victims recover the money and medical care they need and deserve. He also does non-profit work and charity fundraisers.

Attorney of the Year
National Alliance of Attorneys
2022
The National Alliance of Attorneys (NAOA) named Atty. Justin Farahi, the head lawyer at Farahi Law Firm, Attorney of the Year 2022 for his great work in personal injury law. Every year, the NAOA gives awards to lawyers who have done great work and have a great reputation in different areas of law. Less than 1% of all lawyers in the U.S. are invited to join this exclusive group.

Lawyer of the Year
American Institute of Legal Professionals
2021