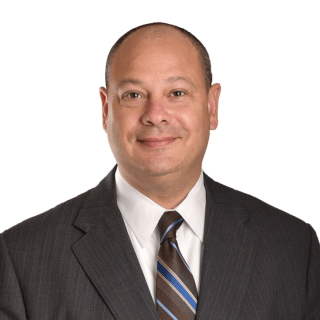 John M. Cooper is one of the founding partners at Cooper Hurley Injury Lawyers and a veteran of Virginia personal injury law practice. A native Virginian, he was raised in Norfolk and Virginia Beach by parents who practiced law. After graduating from the University of Virginia School of Law in 1988, John returned home to work for a federal judge in the U.S. District Court for the Eastern District of Virginia, Norfolk Division, which launched his passion for and career in personal injury law.

For over 30 years, John has worked closely with injured victims and their families and knows the long-term and devastating consequences that auto accidents, railroad accidents, traumatic brain injuries, and wrongful deaths can have. John also understands that catastrophic cases are complex and require extensive time, skill, and resources to properly litigate in court. This knowledge and experience has helped him to become a highly effective, results-oriented litigation attorney who has won millions and millions of dollars in verdicts and settlements for his clients.

In 2020, John and his team obtained the largest reported recovery in Virginia that year, $6.5 Million, for a single car accident plaintiff who become quadriplegic after his accident. John’s other recent results include a $5.8 Million settlement for a traumatic brain injury victim and a $4,725,000 settlement for an auto accident victim who suffered vision impairment and multiple fractures.

John’s strong record has earned him numerous honors, including a Top Lawyer designation by Coastal Virginia Magazine, a VA “Super Lawyer” designation, and an AV Rating by Martindale-Hubbell for his reputation in the practice of law. He is also rated 10 out of 10 by Avvo and is ranked among the top 100 trial lawyers in Virginia. John served for a decade on the Virginia Trial Lawyers Association Board of Governors and served as Chair of the FELA Litigation Group of the American Association for Justice from 2011 to 2017.

Ranked Superb 10 out of 10
Avvo
Ranked 10 of 10 (superb) by AVVO, a national lawyer assessment service

Mini Med School for Attorneys, Online
2021
National Business Institute
Legal cases involving medical issues require a strong grasp of how the body functions, how injuries impede those functions and what the prognoses and treatments look like. In this online seminar, the unique blend of medical and legal insights were shared to help attorneys evaluate, take on and defend cases involving injuries.

Top 10 Questions from Our Referral Partners

Attorney That Specializes in TBI Cases

My name is John Cooper, and I am a personal injury attorney with an emphasis on traumatic brain injury cases.

Webinar: What You Should Know About Traumatic Brain Injury After an Accident

Webinar: What You Should Know About Traumatic Brain Injury After an Accident