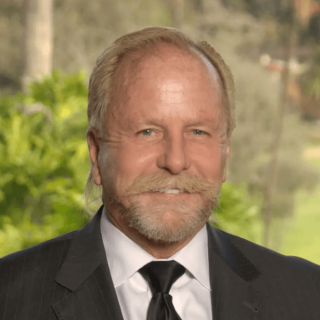 The only past President of the State Bar of California ever elected from the Inland Empire, James Heiting handles civil litigation matters throughout California, recovering over $400 million for clients, dealing with wrongful death, serious injury, professional malpractice and transportation accidents. Also past President of Riverside’s County Bar, his firm has served the Inland Empire for over 45 years.
The managing partner of Heiting & Irwin has been practicing law since receiving his doctorate degree in law in 1976. Mr. Heiting is admitted to practice before all courts of the state, the federal courts, the United States Court of Federal Claims, and the California and United States Supreme Courts.
Mr. Heiting also served on the Board of Governors of the State Bar of California, was a co-founder of the Leo A. Deegan Inn of Court (training younger or less experienced members of the bar) and a charter member of the Inland Empire Federal Bar Association. He was president of the Other Bar (a statewide organization of judges and lawyers helping other lawyers and judges) 1991-1993, and a board member from 1988-2003 and again since 2006. He is or has been a member of multiple federal and state litigation, ethics, and trial associations. He served for several years as the ABA west coast Commissioner appointed by the American Bar Ass'n. President to oversee Lawyer Assistance Programs, evaluating, and providing leadership and support for programs in nine states.
Mr. Heiting has served in a variety of roles in Superior Court and the Federal District Court. He is also sought after as a privately requested and court appointed arbitrator and mediator in state courts and the California Court of Appeal. He has been an invited speaker, lecturer and panelist for the State Bar and a variety of legal and community organizations.
Emphasizing civil litigation in his career, Mr. Heiting represents clients throughout the State in bringing and/or defending a wide variety of claims.

Ralph N. Kleps Award
Fourth District Court of Appeal
1996
For improvement in the administration of the courts.

Adventure: Life to the Fullest. Love in the Fast Lane. Rocket to Success, and Plummeting to (and beyond) Earth. All with the assistance of Alcohol and Drugs... You too, can have all this and more!
January 9, 2014
GIEMLA (Greater Inland Empire Municipal Law Association)

Negotiations with difficult people and how to get past impasse in mediation., MCLE, La Verne, California
January 18, 2014
University of La Verne College of Law

Working for a firm without a firm grip on reality., Fresno, California
November 14, 2014
Baker, Manock & Jensen

What is happening here? Why? I don't understand!, MCLE Madness, Riverside, California
January 24, 2015
University of California-Riverside

Adventure: Life to the Fullest. Love in the Fast Lane. Rocket to Success, and Plummeting to (and beyond) Earth. All with the assistance of Alcohol and Drugs... You too, can have all this and more!, Ventura Bar Association, Ventura, California
January 26, 2017
Ventura Estate Planning Section

The Lawyer, the Addict: Facing a Silent but Prevalent Issue in the Profession, American Bar Association 2018 Section Annual Conference
March 30, 2018

How to Prepare for a Medical Malpractice Consultation

Sara Morgan is a Riverside medical malpractice lawyer at Heiting & Irwin, APLC. In this video, she discusses some tips for how to prepare for a Medical Malpractice consultation with...

Q. Multiple vehicle accident in CA, vehicles who did NOT hit me want my insurance limits information, do I give it?
May 18, 2022
A: Sorry to hear about your accident. Sounds like you came through it ok, and that's a good thing. The answer to your question is, "No". Pass on any and all correspondence and/or requests to your insurance carrier. They will deal with it all directly. Don't get involved in talking to other parties. If you need a lawyer or other advice, your carrier will hire somebody, or already has somebody, to assist.