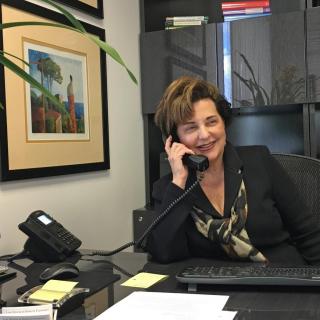 Visit our website: www.BFLEISHMANLAW.com for contact information and to schedule a consultation. Ms. Fleishman is a Certified Family Law Specialist and a Fellow of the American Academy of Matrimonial Lawyers. She has practiced Family Law exclusively since 1976. Ms. Fleishman has been certified by the California State Bar as a Family Law Specialist since 1981. Ms. Fleishman practiced in the Los Angeles Metropolitan Area (Century City and Beverly Hills) for 12 years before moving to Westlake Village in 1988. In her previous career, Ms Fleishman was a High School Teacher in the subjects of History and Spanish. Ms. Fleishman received her Bachelor’s Degree and Secondary Teaching Credential from San Francisco State College. Thereafter, she attended night law school at Lincoln University in San Francisco while teaching days and parenting her two young sons. In December 2013, Ms. Fleishman also received her Master’s Degree in Clinical Psychology from Pepperdine University and is also now a California licensed Marriage and Family Therapist as well as a family law attorney. Ms. Fleishman has also served as a Judge Pro Tem for the Los Angeles Superior Court and the Ventura Superior Court. She has taught Continuing Education of the Bar (CEB) Classes and served as Editor of the California State Bar Family Law News from 1981-1983. Ms. Fleishman was elected a Southern California Super Lawyer in 2009. Ms. Fleishman is an active member of the State Bar and is licensed to practice before all state courts throughout the State of California. Ms. Fleishman maintains a AV rating from Martindale-Hubbell since she was first rated in December 24, 1996. AV is the highest rating available from Martindale-Hubbell which is a publication that rates lawyers as to their legal ability and ethical standards.

California State University - San Francisco State University
B.A. (1969) | Major in History with a Minor in Spanish and a Specialization in Latin American Studies
1962 - 1969

State Bar of California  # 68891
Member
1976 - Current
Activities: Ms. Fleishman was on the Executive Committee of the Family Law Section from 1979 to 1983 during which time she chaired the Legislation Committee and edited the California State Bar Family Law News.

Los Angeles County Bar Association
Member
1976 - Current
Activities: Ms. Fleishman was on the Executive Committee of the Family Law Section from 1981 to 1984.