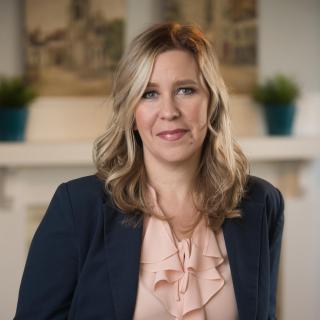 Ms. Harrington strives to preserve civility and respect during the divorce process. She educates her clients about the legal process, working closely with them to ensure they understand their options and rights so to empower them in making the best decisions for the future health of their family. Her goal is to serve each client individually, and find real-life workable solutions for the families she serves, realizing that a marriage might be over but a family still stands. Ms. Harrington has extensive trial and courtroom experience, but understands that the best approach sometimes requires taking the decision-making power out of the hands of the judge and placing it back in the hands of her clients. She is a trained and Rule 31 Listed mediator, and works for an outcome that will work best for all parties involved. Ms. Harrington is a graduate of the University of Memphis, having received her Bachelor of Arts in 1998 and Juris Doctorate in 2001. She has been admitted to practice law in Tennessee since 2001; in the U.S. District Court for the Western District of Tennessee since 2006; and in Colorado since 2008 (currently inactive). During law school, Ms. Harrington served as an extern to U.S. Magistrate Judge Diane Vescovo, and later as a clerk to U.S. District Court Judge Daniel Breen. She has practiced from Chattanooga, Memphis, and now in Franklin, with a sojourn to Colorado in between. She has practiced exclusively domestic relations since 2010. Ms. Harrington currently is a member of the American Bar Association, Tennessee Bar Association, Williamson County Bar Association and Tennessee John Marshall American Inn of Court. Ms. Harrington has served on the Board of Directors for the University of Memphis Band Alumni Association and the Board of Directors for DuBose Episcopal Conference Center. She loves fantasy football, the Memphis Tigers, and enjoys living in Franklin with her husband and two small children.