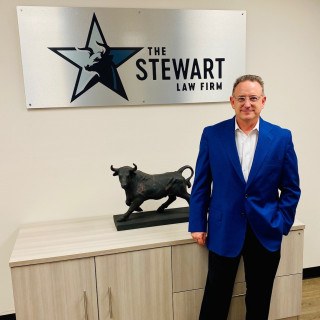 Attorney Stephen W. Stewart has practiced law since he was admitted to the State Bar of Texas in 1997. Prior to focusing his practice on personal injury and catastrophic injury law, Attorney Stewart worked as a trial lawyer and represented major international and national businesses in various civil litigation matters. Over the years, he has obtained the necessary qualifications to practice as the State and Federal court levels throughout Texas. Due to his previous career opportunities, Attorney Stewart gained ample amounts of knowledge, making him a powerhouse in the courtroom as he represents clients. Prior to founding The Stewart Law Firm, PLLC, Attorney Stewart attended Texas Tech University where he obtained his B.B.A in Finances. Following his undergraduate coursework, he enrolled in Texas Tech University School of Law where he earned his Juris Doctorate and graduated with honors and in the prestigious Order of the Coif. Attorney Stewart’s success has led him to become a member of the Million Dollar Advocated Form, which recognizes only those attorneys who have won million and multi-million dollar awards, verdicts, and settlements. If you are looking for experienced, knowledgeable, and relentless representation, get in touch with Attorney Stewart today!