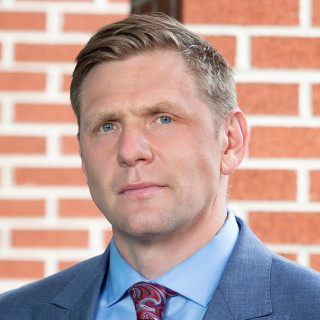 Stephen P. Pfeiffer is known locally as the “Go-To-DUI and Criminal Defense Attorney.” Stephen is a partner at Wolcott Rivers Gates, one of the oldest and largest law firms in Virginia Beach. Stephen has been published as a coauthor in the in the nationally recognized “Inside the Minds” series by Aspatore Books on ­The Legality of Search and Seizure in DUI Cases “A Practitioner’s Everyday Insight Into DWI/DUI Defense in Virginia”. Stephen has an AV® Preeminent Rating – the highest rating available from Martindale-Hubbell, the leading independent attorney rating entity. An AV® Rating signifies that the lawyer has reached the heights of professional excellence. Stephen was selected as a member of the National College of DUI Defense Attorneys and has been recognized as one of the top 100 DUI attorneys in Virginia by the National Advocacy for DUI Defense. Additionally, Stephen is consistently recognized as one of Virginia's Legal Elite by Virginia Business Magazine as well as being selected as a "Rising Star" by Virginia Super Lawyers. Recently Stephen was selected as Top 40 Under 40 Criminal Defense Lawyers for Virginia by the American Society of Legal Advocates. Additionally, Stephen is a founding member of the American Association of Premier DUI Attorneys. Stephen has also recently received recognition from the NACDA as a "Top 10 Under 40" for DUI Defense. Additionally, Stephen has been named a "Top Lawyer" by Coastal Virginia Magazine. Stephen was the American Bar Association's 2007 National Champion in Legal Negotiations and serves as an adjunct professor at Regent University School of Law.

CBDX
Founder and Past President
2009 - Current

DUI Bootcamp, Norfolk
October 12, 2017
Norfolk Portsmouth Bar Association
Presented to local attorneys and judges regarding the nuances of DUI Defense. From the initial client intake through trial, we will go through the documents needed, questions to ask and information to look for in order to perform a full case analysis for the client and prepare a defense. The session will break DUI Defense into five stages: 1). The Stop 2). The Arrest 3). The BAC 4). Reasonable Doubt and 5). Mitigation and Presentation of Your Case

In his inaugural video blog Virginia Beach DUI attorney, Stephen P. Pfeiffer, Esq., discusses two questions he is often asked regarding DUI laws in Virginia. "Am I required to take a field sobriety test?" "Is it still a DUI if I'm asleep in my car and the car is parked?" Both of these questions are discussed by Mr. Pfeiffer, your go-to DUI attorney in the Hampton Roads area. If you've been charged with a DUI or other criminal offense contact Stephen Pfeiffer with the firm of Wolcott Rivers Gates at 757 554 0258.

Stephen Pfeiffer is your Go-To DUI and Criminal Defense Attorney for Virginia Beach and is ready to fight for you.

Q. If convicted of maiming while dwi does that make it illegal for employers to allow you to see alcohol?
September 29, 2022
A: The answer is, it depends. If you were interdicted then it is illegal for you to purchase or possess alcohol. Often times, the courts will also include in the terms of your probation and good behavior that you were not allowed to purchase or possess alcohol. Virginia is an at will employment state, which means the employer can give you a terms that they want you to follow and if you don’t you can be terminated.

Q. what is the penalty for first time 18.2-266. Inside car @ wawa to get water and composure; passed out. 911 call to er.
April 28, 2022
A: If you’re convicted of a DWI in Virginia your license to drive must be suspended for 12 months. TheCourt is allowed to grant you a restricted driving license with interlock for a certain period of time. Additionally you’re facing up to a $2500 fine and up to one year in jail. Depending what your BAC was there could be a potential for mandatory jail time.