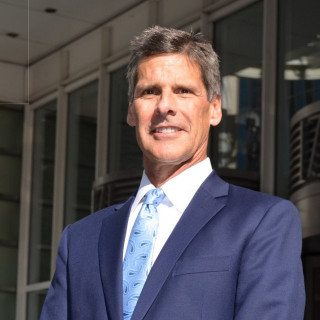 Stephen D. Phillips, past President of the Illinois Trial Lawyers Association, is known statewide for his tenacity, persistence, and skill in the courtroom. His reputation includes an unbridled passion for serving and obtaining justice for injured people who have faced or are facing difficult situations resulting from the negligence and wrongdoing of others. In 2011, Steve was inducted into the International Academy of Trial Lawyers, which is made up of lawyers elected worldwide and limited to 500. Mr. Phillips is frequently asked by both lawyers who have opposed him and even opposing parties to represent their families and friends in personal injury and wrongful death matters. Avvo.com, an independent rating service of all United States attorneys, has recently rated Steve as a top Personal Injury Attorney in Illinois with a rating of 10.0, Superb. Mr. Phillips has also received Avvo.com's highest rating for Medical Malpractice Lawyer, Brain Injury Lawyer, Birth Injury Lawyer, Trucking Accident Lawyer, Auto Accident Lawyer, and Wrongful Death Lawyer in Illinois. Steve has also been recognized in the International “Who’s Who” of Professionals and is a member of the prestigious Society of Trial Lawyers. Steve is an adjunct professor of law at Loyola University Law School of Chicago, where he teaches Civil Procedure Prior to Trial and Personal Injury Law. He serves on the Scholarship Committee of the Justinian Society of Lawyers and has received the highest possible ratings for legal ability and ethics from Martindale-Hubbell. Steve has held consecutive terms on The Illinois Trial Lawyers Association executive committee and has also co-chaired the Medical Negligence Committee and the Publications Committee. He has been elected governor for the Illinois State Bar Association and has served in the State Bar assembly for three (3) terms.

If you are injured by negligence, or if a loved one dies unexpectedly in an accident, your life and family may change forever. We believe in strong justice for your family, and for your loss. Phillips Law Offices aggressively pursues your legal rights by providing comprehensive, compassionate, and committed legal services in Chicago IL. Our personal injury attorneys are prepared and persistent in the fight for our client's rights. We can be the difference between justice and frustration

Do I have to speak to the other side's insurance company after a car accident? | IL Accident Lawyers

One of the most frequent questions our Chicago auto accident attorneys get asked is whether it’s necessary to speak with the other party’s insurance company after a car accident in Illinois. Most people are relieved to hear that it is absolutely not required. In fact, it can do more harm than good. Remember, it’s the job of the other driver’s insurance adjuster to minimize the exposure of the insurance company for the payment of your claim.