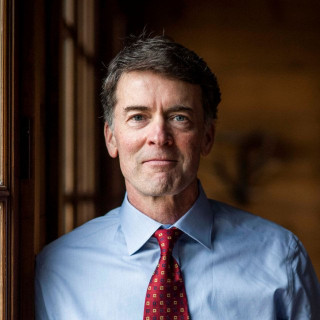 Paul Phillips has an AV Preeminent® rating, the highest peer rating standard. This is given to attorneys who are ranked at the highest level of professional excellence for their legal expertise, communication skills, and ethical standards by their peers. Paul has successfully tried cases throughout Georgia in State and Federal court since 1993. He has won cases in a wide variety of areas, including wrongful death, medical malpractice, vehicular and trucking, and catastrophic injury including brain and spinal cord injury cases.
Paul graduated from Middlebury College in 1987 cum laude with a B.A. in Philosophy and Physics, before working in New York City as a product liability underwriter for a specialty lines insurer before law school. He earned his law degree from the College of William & Mary’s Marshall-Wythe School of Law in 1993. After graduating, Paul practiced at a large litigation firm in Atlanta until 2000, when he moved his family to Albany, Georgia. He has since focused on representing plaintiffs and their families. Paul has been a member of the State Bar of Georgia since 1993. He is licensed to practice in all trial and appellate courts in Georgia, as well as the Federal District Courts for the Northern and Middle Districts of Georgia, and the 11th Circuit Federal Court of Appeals. He holds memberships in the American Bar Association, the Dougherty Circuit Bar Association, and numerous professional legal associations.

AV Rated
Martindale- Hubbell
2022
AV Preeminent®: The highest peer rating standard. This is given to attorneys who are ranked at the highest level of professional excellence for their legal expertise, communication skills, and ethical standards by their peers.

Q. does a dismissal without prejudice require an order to be signed by a judge?
February 9, 2022
A: No, but be careful! A Plaintiff in Georgia is allowed to voluntarily dismiss their case without prejudice before the first witness is called, but there are important limitations on refiling the case. There may be a statute of repose, barring any refiling after a certain time following the event. Also, voluntarily dismissing a case more than once will result in adjudication “on the merits” of the entire action, barring any refiling.