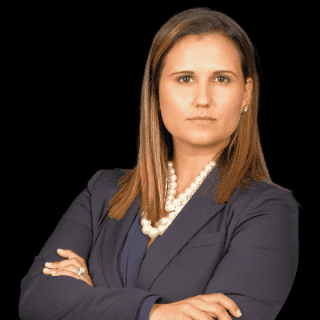 Mariana was born and raised in Brazil until the age of fifteen when her family moved to the United States. During her childhood, Mariana learned her appreciation for hard work and commitment to the safety and well being of others from her father, an engineer, and her mother, a physician. These qualities drove her passion to become an attorney.

After law school, Mariana joined the Hughes & Coleman team. Throughout her tenure, she has gained many years of litigation and trial experience for auto, general premises, wrongful death and medical malpractice cases. She looks forward to a lifelong career helping injured victims and training new attorneys.

She currently resides in Bowling Green, KY with her husband Kevin, also an attorney, and two sons, Wynn and Max. Mariana is a member of St. Joseph Catholic Church and is involved in various community and charity activities, particularly those that have a focus on serving children. During her free time, she enjoys playing sports with her kids.

University of Louisville
B.S. | Psychology with Minor in Chemistry

Join us to help wrestle childhood hunger at Pack-A-Sack on October 29, from 10-4 pm at the Hughes and Coleman offices in Bowling Green! Hillbilly Jim will be on hand...