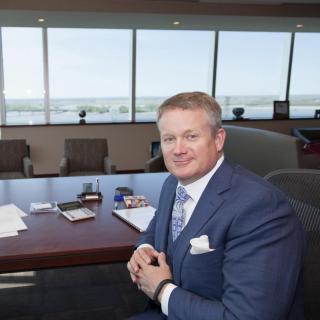 John D. Simmons is founder of Simmons Hanly Conroy LLC, headquartered in Alton, Illinois. The firm also has offices in Chicago, Illinois; New York, New York; Los Angeles and San Francisco, California; and St. Louis, Missouri. Simmons focuses his practice entirely on personal injury litigation, representing people harmed by asbestos-related diseases. Simmons and the firm have litigated some of the largest verdicts in the history of asbestos litigation.The firm’s first trial involved asbestos and a former roofer who was diagnosed with mesothelioma and resulted in a $34.1 million verdict. The firm later secured a $250 million verdict in another asbestos case involving an Indiana steelworker who also developed mesothelioma. Additionally, the firm handles litigation in other areas, such as toxic torts, intellectual property, pharmaceuticals and commercial cases. Over the course of his career, Simmons has been recognized for his outstanding performance with numerous honors. He was named one of the Top 100 Trial Lawyers, was selected as One of 40 Illinois Attorneys Under the Age of 40 to Watch, and was named in the St. Louis Business Journal 40 Under 40 in 2006. Simmons is admitted to practice in Illinois and Georgia. He is on the board of trustees for Southern Illinois University and serves on the executive board of the United Way Partnership.

At Simmons Hanly Conroy LLC, we are deeply committed to giving you a strong, powerful voice to stand up for your rights. In the past decade, we have represented thousands of clients across the country and recovered more than $5 billion in verdicts and settlements.