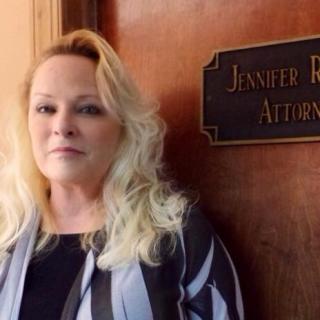 Jennifer R. Pope has been an attorney in Jacksonville, North Carolina since 1988. She grew up in Jacksonville, and attended the University of North Carolina at Chapel Hill as a Morehead Scholar, graduating with her Bachelor of Arts Degree in Psychology in 1985. She went on to attend Law School at UNC Chapel Hill, and graduated in 1988. Jennifer started her legal career with Ellis, Hooper, Warlick, Waters and Morgan, in general practice until 1992, when she joined Frank Pope and her brother, Gordon Robinson, Jr., in the firm of Robinson, Pope and Pope. In 1997, Jennifer decided to concentrate her practice in domestic law, and went to work with Lana Warlick and Amy Jordan, and she practiced primarily family and divorce law there for over 8 years. Jennifer has been active in the Jacksonville community, becoming one of the first female professionals to join the Jacksonville Jaycees and the Jacksonville Rotary Club, (both fine civic organizations), in the early 1990's. She has served on the local and regional committees to select future Morehead Scholars. She was the president of the Onslow County Bar Association from 2006-2007, and also is a member of the North Carolina Bar Association, the North Carolina Academy of Trial Lawyers, and the Onslow County Bar Association.