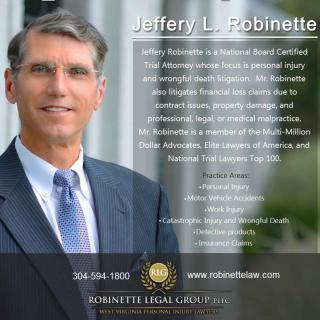 Jeffery Robinette is a West Virginia personal injury lawyer who represents individuals who have been seriously injured or killed due to the irresponsible acts of an individual or company or have suffered financial losses due to property damage or professional malpractice. Auto collisions, catastrophic work injuries, traumatic brain injury, and wrongful death are the focus of our Robinette Legal Group attorneys.

Jeff Robinette is a National Board Certified Trial Attorney, Martindale-Hubbell AV Preeminent Rating, National Top 100, Super Lawyer, and was designated as a National Top 1% Personal Injury Lawyer and a lifetime member of the Multi-Million Dollar Advocates. Mr. Robinette has also been designated as a Top 10 Trucking Lawyer and Motor Vehicle Accident Lawyer, and Top Brain Injury Lawyer for West Virginia.

Mr. Robinette is a native West Virginian who worked his way through Concord College for an undergraduate degree and WVU College of Law.

Mr. Robinette served five years in the US Army as a paratrooper for the 82nd Airborne Division as an artillery and intelligence officer. His experience as a partner in a major West Virginia law firm representing Insurance Companies provided insight into the claims settlement process.

He now uses the knowledge gained over more than two decades of practicing law for the exclusive benefit of the seriously injured in West Virginia.

Recently, Mr. Robinette achieved a multi-million dollar settlement resulting from a semi-truck, multi-car collision after the insurance company offered ZERO for their injuries.

In his free time, Jeff Robinette spends time with his wife and family, church, Gideons, is an avid tennis player, plays guitar and has a passion for racing his Mustang GT on the track.

Founder
Robinette Legal Group, PLLC
1999 - Current
Jeffery L. Robinette was admitted to practice law in 1991 and is licensed in all levels of state and federal trial courts in West Virginia. He is licensed in all state and federal appeals courts in West Virginia and the United States Supreme Court. He is a 1983 graduate of Concord College, and a 1991 graduate of West Virginia University College of Law where he was an editor of the West Virginia Law Review. Mr. Robinette gained extensive litigation and trial experience as a partner level attorney in a large multi-regional law firm, including the completion of the National Trial Advocacy College at the University of Virginia. He has litigated and tried numerous and varied civil cases, including serious personal injury and wrongful death cases. He has served as adjunct lecturer on appellate advocacy at West Virginia University College of Law. Mr. Robinette is also a trained mediator and has completed the basic and advanced mediation training sponsored by the West Virginia State Bar. He is a member of the Multi-Million Dollar Advocates Forum, whose membership includes many of the top trial lawyers in America, and is also a Silver Member of the Elite Lawyers of America, whose membership is restricted to those trial lawyers who have have obtained multiple, multi-million dollar recoveries for clients. Mr. Robinette is an Army veteran, and served with distinction as a paratrooper in the 82nd Airborne Division. He is an active member of the 82nd Airborne Division Association and The Gideons International.

National Top 1% Law Firm
Litigator Awards
2015
The Litigator Awards are perhaps the most rigorous and openly judged trial law rating. Simply being nominated is to be set among the elite of the profession. Those awarded are generally considered among the finest trial lawyers in the nation. It is a feat achieved by fewer than 1% of all Lawyers, and truly a testament to each Award Recipient's remarkable performance relative to peers.

Lead Counsel, Personal Injury
Law Info
2013
LawInfo is an online legal resource center and a way for potential clients to connect with qualified attorneys. Only qualified, experienced and vetted attorneys with recommendations from peers and judges are selected for this honor.

Do You Have Options When Your Lawyer Dropped the Ball?
Findlaw
October 15, 2016

How Long Will it Take to Get a Settlement for My Injury Claim or Accident Case? WV Lawyer Explains

Q. What is the statute of limitations for a personal injury claim in West Virginia?
2 March 2021
A: Personal injury lawsuits in West Virginia must be filed within two years of the event or accident that caused the injury. It is essential to make sure you get your personal injury lawsuit filed in Virginia's court system before the two-year window closes and your claim is forever barred. The sooner you contact an attorney after your accident, the better chance you have to maximize your recovery. As time passes, it can become more difficult to obtain witness testimony and to collect evidence to support your claim.