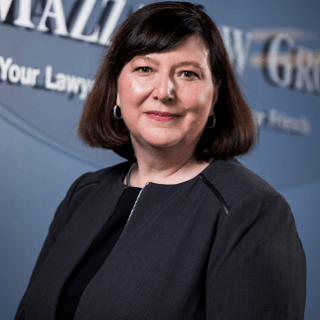 Attorney Helen Stolinas has been practicing in the field of criminal defense and trying cases for over 25 years. She has represented thousands of individuals in matters ranging in seriousness from summary and misdemeanor offenses, up to and including capital homicides.

In January, 2016, Helen joined The Mazza Law Group, where she continues to practice Criminal Defense, as well as Immigration and Civil Litigation. She is admitted to practice in Pennsylvania, as well as Federal Court in the Middle and Western Districts of Pennsylvania.

Another niche area of Helen’s practice is restoration of firearm rights in cases where an individual was wrongly committed to involuntary mental health hospitalization under Section 302 of the Pennsylvania Mental Health Procedures Act. The law provides for expungement of unlawful 302 commitments, and Helen has successfully litigated this issue on behalf of several clients.

Since joining the Mazza Law Group, Helen has had the opportunity to practice Immigration Law as well, with a focus on family-based immigration, student visa issues, and “Crimmigration”- assisting non-citizens in minimizing the impact of criminal charges.

Pennsylvania
Disciplinary Board of the Supreme Court of Pennsylvania
ID Number: 66738
Since 1992

Contact & Map
The Mazza Law Group, PC
2790 West College Ave
State College, PA 16801
Telephone: (814) 237-6255
Cell: (814) 338-9201
Notice: Due to the COVID-19 Pandemic, our physical location is closed to the public, but our firm is functioning remotely to serve your legal needs. Please contact me to set up a telephonic or video consultation at your convenience.
Email Helen Stolinas
Download vCard