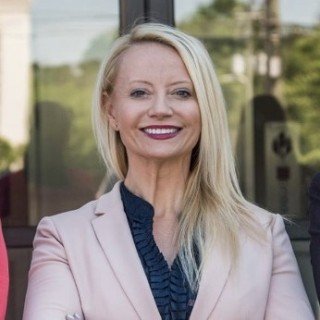 Candace Williams was born and raised in Gainesville, Georgia. She is the daughter of Paulette Cain. Ms. Williams is a graduate of North Hall High School Class of 1993. She then attended Brenau Women's College and earned her degree in Political Science in 1997, cum laude. Ms. Williams was very active while attending Brenau. She served as her sorority Vice President, Alpha Chi Omega, for two years, Vice President of the Student Body, the college Senate Board, and many other groups. Ms. Williams graduated from Brenau with distinction from the Political Science/History Department. Ms. Williams then moved to Washington D.C. and worked for Congressman Bob Barr, then was offered a position as a lobbyist for a civil liberties organization. She left D.C. after four years to attend law school with her brother, Adam Cain. Ms. Williams attended law school at Mississippi College School of Law and earned her degree in only two years. She competed in the school wide Moot Court competition and became the honored overall Winner after being selected following oral argument before the Mississippi Supreme Court and Court of Appeals. She later was selected to compete nationally at the American Bar Association National Moot Court Competition against the best law schools in the Country. Ms. Williams was named a semi-finalist after arguing before the Supreme Court of Texas. After early graduation from law school, Ms. Williams returned to her hometown to practice law. Ms. Williams practices solely in the area of Family Law. This involves complex divorce cases, contempts, modifications, adoptions, legitimations, paternity actions, and reviewing various legal documents for domestic clients.

Who's Who Among American Law Students
American Bar Association
2002