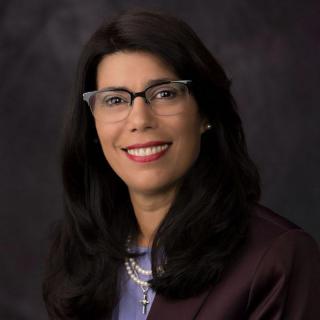 Ana S. Mendieta graduated with a Degree in Law from the Universidad Nacional Autónoma de Honduras. Soon after graduation she worked for the Department of Justice in Honduras, serving as a Special Agent under the supervision of the Attorney General. There, she led investigations, which resulted in the prosecution of a number of individuals involved in various types of criminal activity, ranging from violent crimes to white-collar crime. After a successful tenure with the Office of the Attorney General, Ms. Mendieta moved on to the Supreme Court of Justice of Honduras where she served as a clerk to the Chief Justice and as the Executive Director of the Judicial Gazette of the Supreme Court. Through these positions, Ms. Mendieta compiled, edited, and published the first yearly judicial and administrative report of the Supreme Court to be published during Congressional meeting. Ms. Mendieta also edited and published the Judicial Gazette, which comprised briefs and decisions dealing with new Rules of Law as well as other topics of national interest, from those relating to judicial reforms taking place in Honduras to those dealing with women's and children's rights and the newly established Code of criminal procedures.
In the United States, Ms. Mendieta served as a volunteer for the Florida Guardian Ad Litem Program for the 20th Judicial Circuit in Collier County, Florida. As an officer of the court, she was appointed to represent the best interest of the child in dependency hearings. Being a multilingual advocate, many of the children represented were the progeny of immigration center detainees. Realizing that the amount of aid she was able to provide to the children and their families was limited – due to her status as a volunteer – Ms. Mendieta decided to pursue a law degree in the United States, which she obtained from the Ave Maria School of Law, in Naples, Florida and her License as an Attorney and Counselor at Law from the Florida Supreme Court of Justice.

Q. hi, i gave asylum and i won green card but i don't know where to give the documents given to me i don't know how to get
November 22, 2022
A: Dear writer, I strongly suggest you contact an immigration attorney in your locality or go to a legal aid office for further assistance in obtaining your green card based on asylee status. On the internet I found this information. I do really hope this helps you. Catholic Charities Refugee and Immigration Services (617) 625-1920 275 West Broadway Boston, MA 02127 Immigration

Q. I have a job, working there for over a year. Marriage based green card interview is coming up. is there a problem?
November 9, 2022
A: If you have a job and are working with an employment authorization document, you should not have a problem. However, If you are working illegally, while in the process of acquiring legal status, it depends. I strongly suggest you speak with an immigration attorney about this issue. You would not want to lose the opportunity of becoming a lawful permanent resident. Best regards,

Q. Good day, My wife and I are applying for naturalization.
November 9, 2022
A: Dear N-400 applicants, First, let me congratulate you for your interest in becoming U.S. citizens. Secondly, how scheduling and rescheduling issues have increased recently, my advice, not only as an attorney, as this question is not a legal one, but as a person, is to plan to attend the interview. Once you are U.S. citizens you can travel as you please! Best regards,